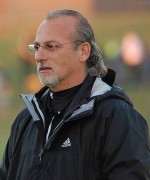 Center Midfielder and Outside Forward

I believe individual soccer skill development and ball mastery is a must. Without ball mastery skills a player can never reach his or her full potential. Training players to execute a variety of turns, moves and skills will enhance a player’s individual performance on the field. Three main factors that worked for me as a trainer are Process, Focus and Execute. Simply, players must constantly scan the field and visually, know what they are going to do with or without the ball before they pass, receive or move into space.